Rev. Charles J. Chaput, Archbishop of Philadelphia, will give a talk titled “Things Worth Dying For: The Nature of a Life Worth Living.” 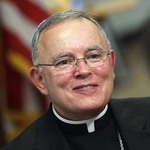 Archbishop Charles J. Chaput, O.F.M. Cap., is the Archbishop of Philadelphia and was the second Native American to be ordained a bishop in the United States, and the first Native American archbishop. Archbishop Chaput served on the U.S. Commission on International Religious Freedom, 2003-2006, and is the author of several books including Render Unto Caesar: Serving the Nation by Living Our Catholic Beliefs in Political Life (2008) and Strangers in a Strange Land: Living the Catholic Faith in a Post-Christian World (2017).